Written by pimaair on December 4, 2019. Posted in McDonnell - Douglas. 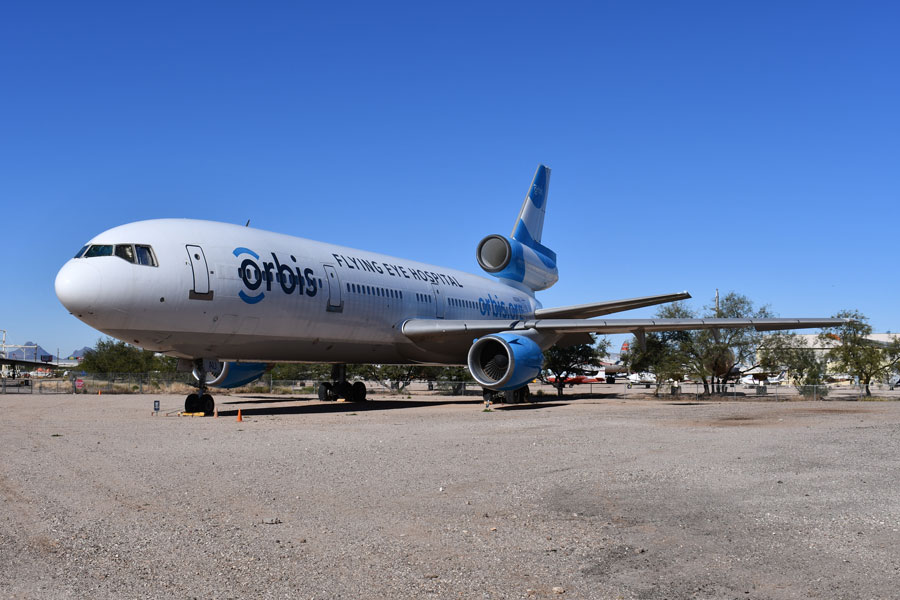 The McDonnell Douglas DC-10 is a three-engine wide-body airliner.  Design work began as Douglas’ entry for a U.S. Air Force contract that eventually resulted in the C-5 Galaxy. With the Air Force contract lost to Lockheed, Douglas redesigned the aircraft as a medium to long range airliner capable of seating over three hundred passengers.  Several versions of the DC-10 were built.  The shorter ranged “Domestic” version flew first in 1970 and entered commercial service with American and United Airlines in 1971.  The longer range “International” version entered service the following year.  Early in its service the DC-10 developed a bad reputation for safety after several accidents related to design defects, particularly in the aircraft’s cargo doors.  As problems were identified and fixed the plane’s safety record improved and by the end of its passenger service the DC-10’s record was similar to other aircraft of its generation. The last passenger carrying DC-10 was retired in 2014 however many DC-10s and similar MD-11 aircraft continue to fly as cargo carriers.  The United States Air Force uses an aerial tanker version of the DC-10 designated as the KC-10 Extender.

In November 1991 the museum’s DC-10 was sold to Orbis International and registered as N220AU.  Orbis is a non-profit organization dedicated to saving sight worldwide.  As a major part of its operations Orbis converted this aircraft into a flying eye hospital with a surgical suite and classrooms.  The aircraft has been used throughout the world to treat patients and to train medical personnel.  This aircraft was replaced with a newer MD-10 aircraft in June 2016.