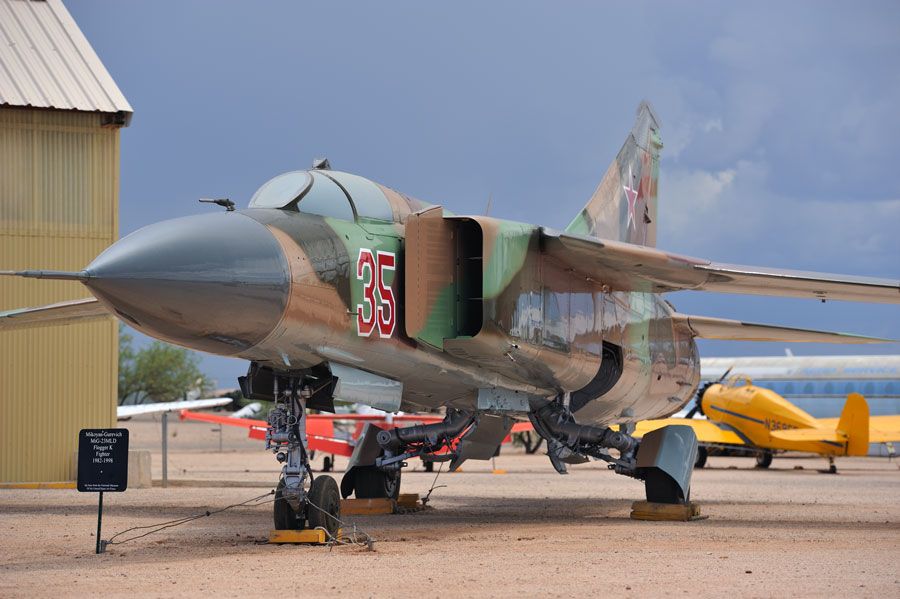 The MiG-23 was the Soviet Union’s answer to American fighters such as the McDonnell-Douglas F-4 Phantom II.  Development of an aircraft to replace the MiG-21 began in the mid-1960s.  The Soviet’s eventually adopted a swing-wing design similar to the American F-111 in order to take advantage of the delta wing’s high speed advantages while also improving slow speed performance and reducing take off and landing speeds and distances.  The first flight of the MiG-23 came in June 1967 and the aircraft went into service with the Soviet Air Force by 1970.

Although several versions of the MiG-23 served with the Soviet Air Force and with numerous other air forces world wide it never quite lived up to its initial promise to replace the MiG-21.  The final version of the aircraft the MiG-23MLD introduced in 1982 incorporated advanced avionics and radars along with aerodynamic improvements that helped keep the aircraft competitive until the MiG-29 could be brought into wide spread use.  The MLDs in Soviet service were all upgraded from earlier aircraft but the export versions were all newly built.  In all more than 5,000 aircraft were built.

Assigned to the 655th IAP.  This aircraft is believed to have been assigned to this regiment during its deployment to Afghanistan during Soviet involvement there and remained with the unit when it moved to Pärnu Airport in Estonia.  The aircraft was retired in 1991 and sold to a group in Finland.  It was later sold to a private individual in the United States who intended to fly it.  Due to a paperwork mistake the aircraft was seized by the U.S. Government and turned over to the United States Air Force.  It was eventually delivered to the National Museum of the United States Air Force where it was displayed for several years.  In 2010 it was placed on loan to the Pima Air & Space Museum for restoration and display.