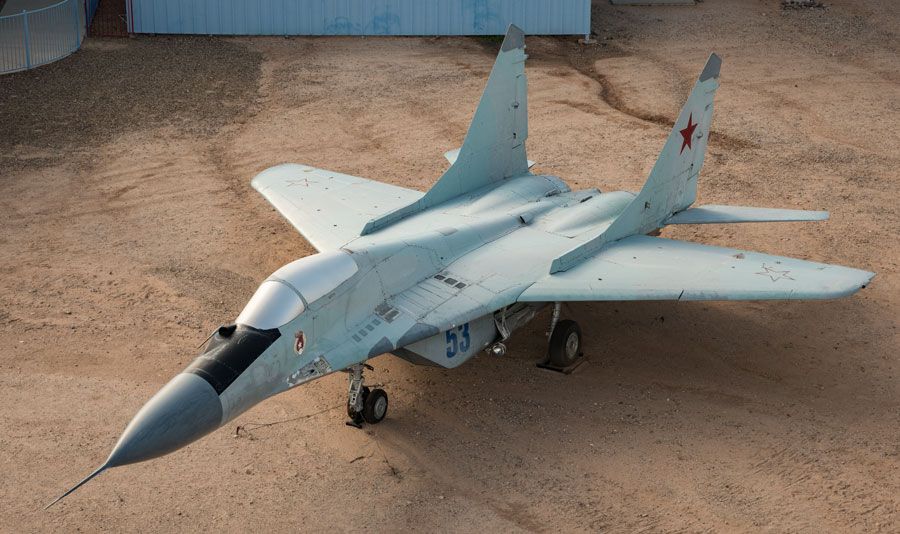 Development of the MiG-29 began in the late 1960s to meet the Soviet Union’s requirement for a modern small tactical fighter to replace the MiG-21.  The aircraft that emerged in 1977 proved to be a more than worthy successor.  Flight testing was still underway in 1982 when the first production aircraft were rushed off the assembly line to match the latest generation of American fighters the F-16 and F/A-18.  Like its predecessor, the MiG-21 the Fulcrum was widely exported by the Soviet Union with nearly thirty countries using the export version of the MiG-29.  The exported aircraft were not as capable as the ones built for Soviet use.  They have a less capable radar and lack the ability to drop nuclear weapons.

This aircraft was built in the 1980s for the Soviet Air Force.  It was assigned to the 86th Guards Fighter Aviation Regiment in Moldavia.  When the Soviet Union broke up the treaties signed between Russia and the former Soviet republics turned large amounts of military equipment over to the new governments.  Moldavia took possession of 34 MiG-29s for their Air Force.  These aircraft had their full electronic and weapons delivery capabilities.  In 1997 the United States purchased twenty-one of these aircraft from Moldavia in order to prevent the nuclear capable aircraft from being sold to potentially unfriendly nations.  After a brief testing period, most were either scrapped or placed in museums.  This Fulcrum was placed on display at Tyndall Air Force Base, Florida until 2008 when it was loaned to the Pima Air and Space Museum by the National Museum of the United States Air Force.