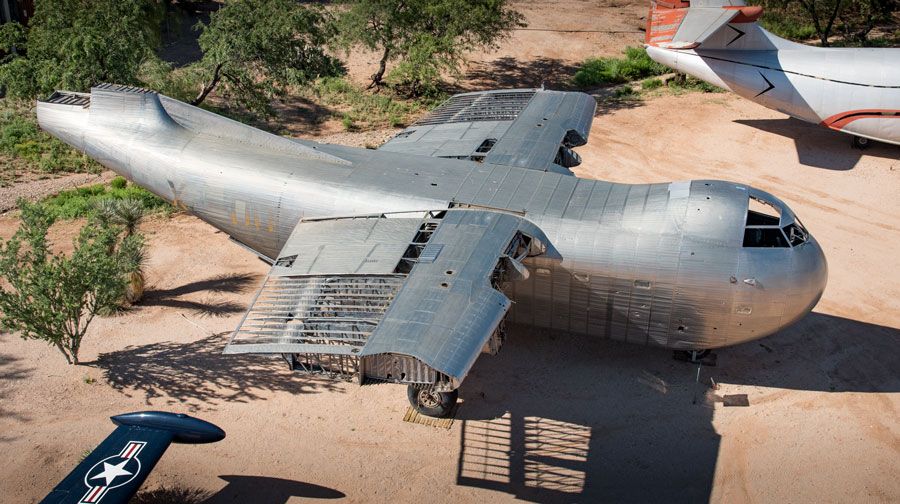 Early in World War II it was feared that there would be a shortage of aluminum for the construction of aircraft, so the government sought out designs that used what were called “non-strategic materials.”  Generally, this referred to wood, but the Budd Company took a different route.  The company had been a designer and builder of railroad passenger cars for many years and they adopted the techniques and materials used at the time in them to an aircraft.  Instead of riveted aluminum the Conestoga was built primarily from spot welded stainless steel.  Initial orders in 1942 from the Navy for 200 and from the Army for 600 boded well for the design.  However, the expected aluminum shortage never developed and cost increases and production delays resulted in all but 25 aircraft for the Navy being cancelled.  In the end, only 17 were built and all but one went straight from the factory to storage and sale as surplus.  Conestogas flew briefly for Flying Tiger Airlines after the war and in South and Central America.

Built by the Budd Company, Philadelphia, Pennsylvania and delivered to the U.S. Navy on October 19, 1944

January 13, 1945         Declared surplus and turned over to Reconstruction Finance Corporation for sale.

Between 1948 when Flying Tigers quit flying the Conestoga and 1972 the plane again entered Mexico and was given the registration XB-DUZ.

August 23, 1972          Bought at auction at Douglas, Arizona.  Aircraft had been abandoned at Douglas Airport for many years.