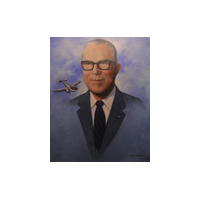 Born on November 27, 1899, in Pueblo, Colorado, A. Lee Moore held a love for aviation throughout his life. His parents moved to Phoenix in 1904 where he resided until his death in 1974. Having learned to fly in 1928 Moore Became one of the early pioneer Arizona aviators, accumulating over 7,000 hours in his logbook. With Barry Goldwater, he bladed the first dirt runway at the airport we now know as Sky Harbor Airport. He was also a key figure in locating both Luke and Williams Army Airfields in the Phoenix area in 1940-41. Early in World War II, he flew submarine-hunting missions out of Mississippi. Later during 1944-45, he served as a flight instructor for British Cadets learning to fly at Falcon Field. The quality of his instruction brought him accolades from pilots in combat. When not flying, Moore was a mortician. Seeing the need for transporting critically ill or injured people from Arizona’s remote areas to hospitals, he established the first Air Ambulance service in the Southwest. Whenever there was an illness or injury in any part of Arizona it became standard practice to call for A. Lee Moore and his airborne ambulance. Moore was a founding member of the Phoenix Aviation & Airport Commission on which he served for 27 years.