Barry Goldwater was born in Phoenix, AZ and began flying in 1930.

He joined the Army Air Corp in 1941 and served in the Air Transport Command and in the Burma-India Theater. After WWII he helped formed the Arizona National Guard and he joined the Air Force Reserve as a pilot, attaining the rank of major general. Barry Goldwater was elected to the U.S. Senate in 1952. Serving on the Senate’s Armed Service, Science, and Transportation, and Intelligence Committees, Goldwater either sponsored or supported virtually all legislation that enhanced the nation’s security. His contributions to U.S. Intelligence capabilities, space development, and aviation, in general, are unequaled. 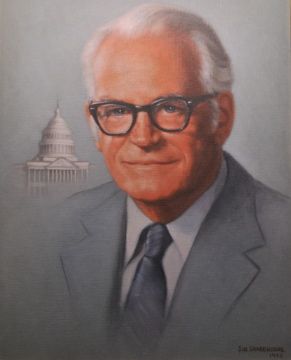