Major General Donald L. Owens was born in Phoenix on April 13, 1930, and except for his teen years has lived in Arizona his entire life. In 1952 he joined the Arizona Air National Guard as a private, to begin nearly 45 years of service. He received his Air Force Pilot’s Wings in 1953 along with his commission as an officer.

In 1956 he became Chief of Maintenance for the Phoenix Air National Guard Base at Sky Harbor International Airport, a position he would hold for the next 20 years. He was responsible for the maintenance of the aircraft of the 161st Air Refueling Group during this time. 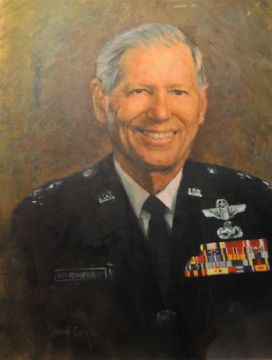 In 1977 he became the Chief of Base Activities for the Phoenix Air National Guard Base and a year later he took over as commander of the 161st Air Refueling Group. For two years, beginning in 1983 he was commanding general of the Arizona Air National Guard. That same year he became the Adjutant General and Director of the Arizona Department of Emergency and Military Affairs, a position he held until 1994. Since his retirement from the Air National Guard General Owens has worked as a consultant for several defense contractors and as the Director of Military Programs for Robertson Aviation.