Aerobatics pilot Patty Wagstaff was born in St. Louis, Missouri September 11, 1951. She was raised in Japan where her father was a Japan Airlines 747 captain. Patty learned to fly in Alaska where she had moved in 1978. By 1985, she was skilled enough to qualify as a member of the U.S. Aerobatics Team. Since establishing her home in Tucson, Arizona in 1985, she has based her aerobatics operations at nearby Avra Valley Airport. She has flown airshows and competitions throughout the United States, Canada, South America, England, Switzerland, and France. 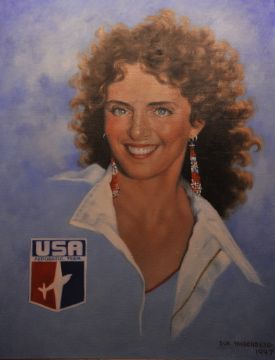 She has trained with the Russian Aerobatic Team in the Soviet Union. Patty served five times as a member of the U.S. Aerobatics Team in the period 1985 – 1994. In 1991, 1992 and 1993 Patty was top U.S. Medal Winner in competition at the World Aerobatics Championships. Her exciting low-level airshow performances reflect her competition background and emphasize the complex precision and excitement of competition aerobatics flying. Patty was recognized for her contributions to aviation by the Experimental Aviation Association in 1993 and the National Aeronautic Association in 1994.