Mélanie was born on May 30, 1982 in Rugby, England to a French mother and a British father. Mélanie and her parents left for France when she was three years old. Brought up in the South of France in a very modest home environment, she went to school in Monaco. She wanted to become a fighter pilot but was quickly discouraged by the fact that there was only one female pilot in the army at the time. Her story is one of passion, perseverance and overcoming the odds. Nobody believed that she could fulfil her childhood dream to become a pilot when she quit school at 18 to enter adult life.

When she took a job in a petrol station in the South of France near where she lived, the dream seemed far away. But thanks to her relentless work, she became manager of several petrol stations. She was then able to save money to pay for flying lessons, which she started at age 21. She met Laurent Gil, her first instructor, who immediately recognized her talent and encouraged her to pursue a career professionally.

Mélanie has always lacked in financial support. She began working for free at the flight school and leveraged enough free lessons to meet the standard required amount for becoming a commercial pilot. Shortly after getting her pilots license in her very first year in aerobatics competition, she achieved victory at the French Cup in the “Espoir” category.

In 2009, she became a flight instructor and eventually gained a job at the National Aviation School. She returned to competition in 2010 where she won several titles including the French championship. She was then registered on the elite sportswoman list by the French Ministry of Sport and earned a spot on the prestigious national French Aerobatic Team.

With focused and steady commitment, she worked her way up the categories. In 2014, she was 7th overall at the Aerobatics World Championships “Advanced” level and first at the female ranking. In 2015, she ranked the world’s 5th best female pilot in the highest category “Unlimited” and was a member of the French team which won the world title. In 2016, she qualified as an Airbus A319/320 pilot. 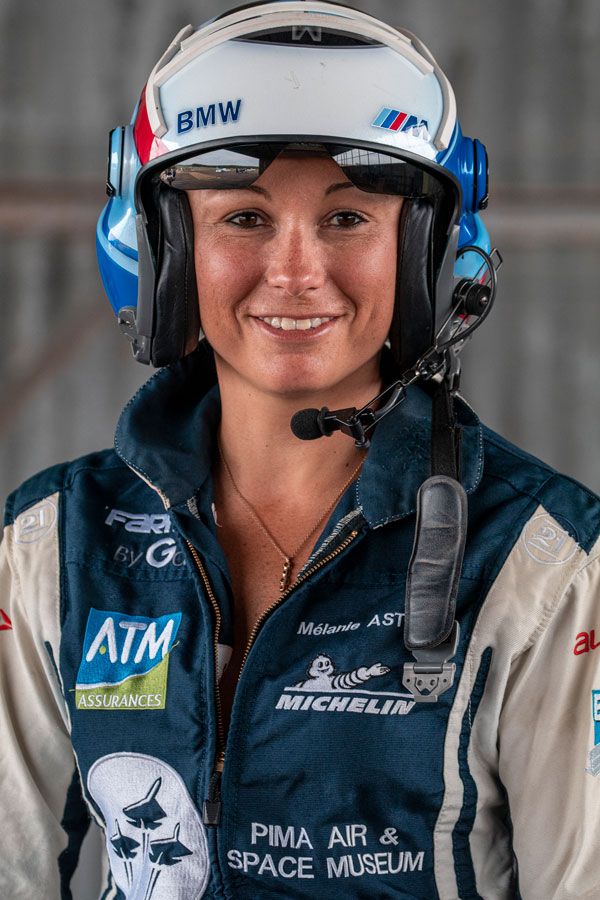 To date, she’s a five-time French Champion with top ten rankings at European and World levels, as well as French team honors, the first woman to compete in the famous Red Bull Air Race Series Challenger Class, and in the 2017 finale at Indianapolis Motor Speedway, she became the first female race winner in the history of the Red Bull Air Race. Additionally, the achievement made her the first woman to win a major motorsport event in more than 100 years of racing at the famous American oval. She is also the 2019 British Unlimited Aerobatic Champion.

Outside of flying she is an ambassador for the association “Les Ailes du Petit Prince” an aviation make-a-wish style foundation for terminally ill children, as well as sponsor of a squadron of the French Army Light Aviation flight school, the “Escadrille des Services d’Aerodrome.”

Her passion for aviation, cheerful and engaging character, and desire to share her experiences and devote time to those like herself that had a dream but needed to overcome obstacles through determination and hard work, led to the partnership with the Pima Air & Space Museum. As she flies our colors, we are proud to be a key sponsor and to make history together.