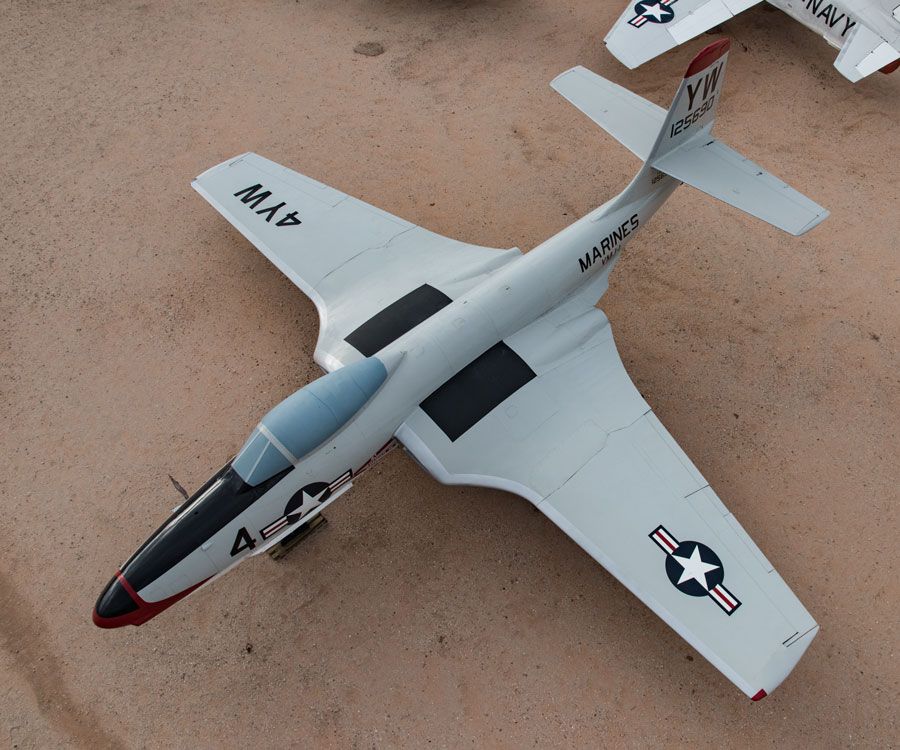 The Banshee was developed as an enlarged version of the McDonnell FH-1 Phantom.  The aircraft featured more powerful engines and greater armament than the earlier aircraft.  The F2H-1 prototype first flew on January 11, 1947 and operational aircraft reached service in March 1949.  By the end of 1949 the F2H-2 version of the aircraft was in service.  It featured a longer fuselage and wings which allowed more fuel to be carried, increasing the plane’s range.  The F2H-3 and F2H-4 featured an even longer fuselage and more fuel as well as a search radar making them all-weather and night capable.  The F2H-2 was also modified into a photo reconnaissance version with a lengthened nose housing several cameras.  The Banshee was used extensively during the Korean War as both a fighter and a reconnaissance plane.  Banshees were also sold to Canada and served in the Canadian Navy from 1955 until 1962.  The last Banshees left the U.S. Navy’s inventory in 1965.

Built by McDonnell Aircraft at St. Louis, Missouri and delivered to the U.S. Navy on October 12, 1951.

1958-2012                   Displayed at St. Louis, Missouri; Cherry Point, North Carolina; and Wings of Eagles Museum, New York.  At some point the aircraft’s original photoreconnaissance nose was replaced with the gun equipped nose of a standard Banshee fighter.